Mirrors of my thoughts tonight…

Lenny Kravitz is mourning the loss of Michael Jackson,
along with millions. He wrote about his personal memories of the King of Pop, and how, even at the age of 10, Jackson was matching legends
like James Brown and Aretha Franklin. Read the full letter below.There
will never be another talent like Michael Jackson. Many people are
saying what a performer, what an icon. How many Grammy’s he won. How
‘Thriller’ was the biggest selling album in history. They speak about
the controversy and countless other things. But the truth of the matter
is he was a boy that God blessed with the most angelic voice.Just
listen to an early Jackson Five album and listen to that voice. The
purity, the feeling, the interpretation of the lyrics. At the age of
ten, he was on par with James Brown and Aretha Franklin.
But the thing he had that they could not match was the fact that he was
a child. But at the same time he sang as an adult. That line between
child and experienced adult took his expression to an unmatched level.I
heard somebody on the BBC news tonight say that he was a great singer
but didn’t have feeling like James Brown. That somebody is not
listening carefully. As a child he did it all. Even if he had not done
‘Off the Wall’ or ‘Thriller,’ he would still be a genius in my eyes.
I got to work with Michael on a track that has not been released and it
was the most amazing experience I’ve had in the studio. He was funny.
Very funny and we laughed the whole time. I also saw what a beautiful
father he was. He was a beautiful human being. I am deeply saddened
this evening. He was the first live performer I ever saw. I
got to see him at Madison Square Garden when I was eight. If not for
him, I wouldn’t be doing what I’m doing. He gave me joy as a child and
showed me the way to go. He was music. Period. His hugeness as a star
was great but before he was the King of Pop, he’d said it all. May you rest in peace sweet Michael. You gave us all you had to give. Lenny.

Spinner @ AOL
…and when the groove is dead and gone, yeah
you know that LOVE survives, so we can rock for-ever on… MJ FOREVER 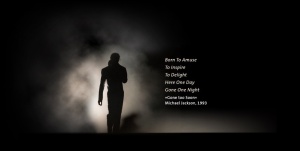 This entry was posted on June 27, 2009 by MJJRealRealm. It was filed under Thoughts & Prayers .