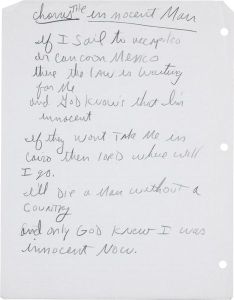 MICHAEL JACKSON The Innocent Man, 2005A single page of lyrics entitled ‘The Innocent Man’, the 13 lines for the chorus written in pencil beginning: ‘If I sail to Acapulco’, and ending: ‘And only God knew I was innocent now’. 28 x 21.5 cm. (11 x 8 1/2 in). These lyrics were apparently written during the trial in 2005.ESTIMATE £8,000-12,000PROVENANCE Private collection, United StatesIf I sail to Acapulco or Cancun MexicoThere the law is waiting for meand God knows that I’m innocentIf they won’t take me in Cairothen Lord, where will I go?I’ll die a man without a countryand only God knew I was innocent now.

David LaChapelle on his lookalike portrait of the King of Pop

The celebrity photographer and artist David LaChapelle had always wanted to
take a portrait of Michael Jackson, and nearly did: several shoots were
lined up and cancelled as Jackson grew increasingly wary. “Photographers
weren’t nice to him,” says LaChapelle. “He got scared.”

After Jackson’s
death LaChapelle decided to pay tribute, photographing a young lookalike in
Hawaii, just outside his own home: a 25-acre ranch on the coast, three hours
from the nearest shop. He moved there three years ago, turning his back on
lucrative contracts with Vanity Fair, Italian Vogue and Rolling Stone. The
“devil” in red is a friend who performs in the Cirque du Soleil. The image
forms part of a trilogy inspired by Mexican saint cards. LaChapelle is
convinced that Jackson was an innocent man.

“I don’t think he was capable of hurting anyone,” he says. “I think there’s
something really biblical about what happened. His lyrics are so naive and
so beautiful. It’s one of the most epic stories of our time, to go from such
heights to such depths.

This entry was posted on November 19, 2009 by MJJRealRealm. It was filed under More of HIS OWN WORDS .